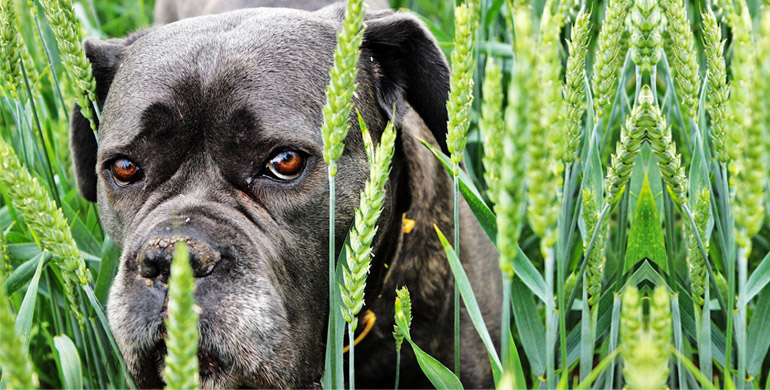 Anyone who has a dog gets great tips rom alleged professionals at every corner. Whether dog food, practice or education - but what about the myths about dogs really true?

„My dog jumps on me, because he has no respect“

Still, this myth continues to be persistent in the consciousness of many. However, it is very important to distinguish which trigger that jumping has. It may in some cases happen that it express disrespect, but this is rather rarely the case. Behavioral scientist have found that this is normal canine behavior. Puppies, for example, want to show their parents and higher-ranking animals submission in which they are licking them the corner of the mouth. Cause the human mouth is so far above so that nothing else will remain but to leap towards human face.

Does the dog jumps up on you when you come straight home, it is rather an expression of strong pleasure. If the Pounce is a problem, for example, because the dog is very large and heavy and children or old people live with him the house, you can easily work off.

„My dog is still in honeymoon period“

A sentence that has been pronounced by the thousands and thousands of dog owners and it is still wrong. The so-called "honeymoon period" exists only within their own pack (with wolves). Only their own offspring has certain freedoms in their own pack and is not affected by the existence of the pack not to endanger. A strange puppy would be dead-bitten mercilessly with wolves, because it represents competition.

It is therefore not surprising that strange dogs react strange on our puppies, and even sometimes aggressive. Especially older dogs are quickly annoyed from puppy and have pain if a little lad jump on them and bites their ear with his baby teeth. For this reason let pup leashed and previously ask the owner of the other dog if a contact is ok!

„punish by neck grip and/or throw it on the floor“

This is an old method to punish dogs and long outdated! Not only outdated but also a no-go in the dog training, because by the handle (simulated bite) in the neck, we dont shown some dominance but express the will to kill for! The dog, if he is sensitive, get scared of you and the trust would lost!

"But the bitch still wears her puppies around the neck." Yes that's right. However, while it is extremely soft and the puppies fall to a certain age in the "carrying rigid" and can be easily transported. This is absolutely not comparable with a handle in the neck for punishment! Especially negative punishment should not be the means to an end!

The myth of the dog you should turn on the back / throw if he is not obeyed as nonsense. This gesture does not exist in the wolf pack and does not belong in this constellation for canine expression! When a dog turns on his back, then only from his own volition because he accepted the dominance of his opponent! The turn on the back by the owner is nothing but stress for the dog that does not know what hit him!

„That dogs agree among themselves“

This is true only in certain situations. Should meet first and only click "Contact Search" go the other, possibly with a raised tail and staring look we should not interfere the two dogs. In this case, the dogs are testing who is more dominant of the two and who gives in first. Also belongs to this behavior, the head lay on the other shoulder or sniff at the rear. In this case, you should furthermore well observe the dogs because it can occur a dispute at any time. Is this resolved within a few seconds should not be interfered with.

However, it degenerates into a serious biting you should definitely intervene as a holder. However, this does not mean that you should go in between, because the risk is too great even to be bitten in the heat of the moment. If you try to stop biting by going in between then you should know that you act purely legal negligence and are not entitled to compensation or smart money, even if you should be incapacitated by the Bite accident!

It makes more sense to create distractions in this situation. Scream out loud can help loud stomping, throwing a metallic chain, loud clapping or whistling, or equivalent

On the market there is also a "cry in the can." A tin which makes an incredibly loud noise if you push a button. This should be thrown directly between the biting dogs! This ensures always a last resort for distraction. There may even find out what it was, the two counterparties suddenly unite against the unknown enemy and collectively try for there degree.

Many advise that the holder will quickly run away in opposite directions, so that the dogs follow her pack. Unfortunately, most of them get the brawlers with nothing. Thus, this tip is useless.

„Dogs on the couch think they are the pack leader“

Also this is a persistent rumor that dogs that claim a higher position are dominant and claim the pack leadership. But honestly: Have you ever (in a documentary, or similar) seen a wolf rests only there with the pack, where he a rock or stone or hill available has to lie higher than the other? So I do not have. Simply because it is nonsense.

However, there is really a reason why the dog is getting back on the couch or in bed like: It's convenient! You should make it clear from the outset whether the dog should on the couch and go to bed or not. Allow it once, your dog will always insist on allowing this.

However, is important: If your dog on the couch or on the bed and they want to sit down, then he should vacate the place by itself. At least when the command "Down" comes from. If he does not do this really is a ranking conflict in space, should be worked on. Otherwise, it's simply the convenience of four-legged friend that he would lie on the couch at home.

„An old dog has nothing more to learn“

This is not entirely correct.Dogs learn every day of their lives. Whether 5 months, 4 years or 15 years. But the fact is: The older the dog, the longer it might take until a new command is learned. Dogs over 8 years may well get a kind of "learning disability retirement." This does not mean that they learn nothing. It simply means that you need a little more patience for these dogs. Even an old dog can learn new tricks.

„Dog's who wag the tail are always friendly“

Even so, a sentence which you often get to hear. "He's friendly then he wags his tail." Unfortunately this is not always the case.For this you need knowledge of body language of the dog.It is not only enough to pay attention to the tail.The entire body must be "read".How are the ears and the view? Is the dog tense? How quickly he wags? At what height is the tail? Is the neck fur bristling?

So many things that you must take in order to decide whether the dog is friendly to or not, because the wagging of the tail can bring different expression.Firstly, clearly the joy. Here, the expression is soft and friendly. The head is slightly lowered and the tail wags not at the top or even almost caved (submissive pleasure) and pretty fast.

Then a tail wagging express tension.It symbolizes the be torn in a situation. The body of the dog is tense, the eye wanders back and forth and the tail keeps getting back to the fronds.A wagging tail can also express dominance. Then the dog's head near the top, the view is clear straight. The whole body expresses self-confidence and the rod is fully up and wagging slowly back and forth.Note: This situation may follow an aggressive response when compared with the dog shows any submission.

„When dogs eat raw meat they will aggressive“

This is a mistake. Raw meat for dogs, in a balanced mix, is the healthiest food at all and there is no relation between the feeding of raw meat and increased aggressiveness!On the contrary. Studies have shown that a high proportion of cereals can be (as in most dog foods from retail) promote aggression!Therefore: Fresh meat is the healthiest ever, and in no way increases the aggression but may even help them to help reduce.