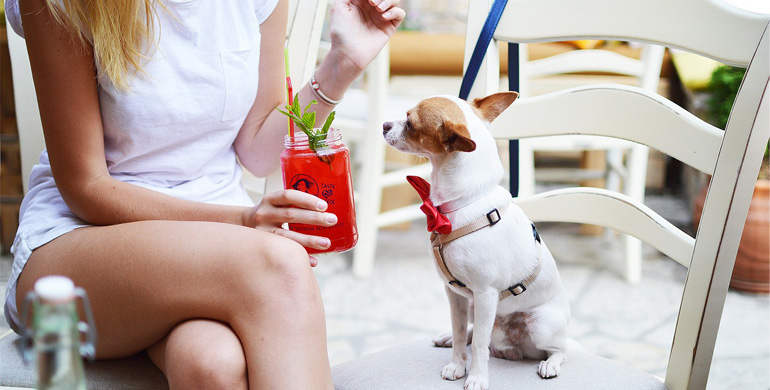 Lively, energetic and tenacious terrier-like, has this miniature version of a dog one of the most powerful aura in the dog world.

All of its properties can be derived from an Indian legend of "Chi's", which reads as follows: "The little dog accompanied the soul of his masters through the nine rushing rivers of the world to death in paradise." The Chihuahua is the smallest breed of dog in the world . He is also one of the oldest breeds that we know.A possible theory of the origin of Chihuahuas is that he ( the Techichis ) is derived from the existing in ancient Mexico sacrifice dogs.The best known and suspected for years as credible origin story is that the Chihuahua to have been the sacred dog of the Toltecs.

There is little evidence of the two theories, but its name comes from the Mexican state, from the early 20th century. The first copies were exported to the USA. During the Chihuahua became popular quickly in the US, gained the race in Europe until 1960 recognition. Today he is on both sides of the Atlantic alike.

Wherever they are descended : Today, the Chihuahua is famous for shows and house dog. Despite its tiny size, it requires no special care, but it should not come together with to small children who may be too rough with only handle a small animal. Care claims and maintenance are minimal.

Because of his personality of Chihuahua offers its owners endless fun when they watch him in how he organizes everything to his advantage. Since it is his respective owners very fond of, it can sometimes develop jealousy and will do anything to get the attention and admiration, he believes that it deserves. It can sometimes be a bit tedious to educate the Chihuahua because in spite of his size he is stubborn and can be quite annoying when he does not know the basic principles of behavior. In addition, there is an urgent need well to get him used to other dogs - you risk that his combative nature comes to light in the most inopportune moment exactly.

Character of the Chihuahua 's

Although the Chihuahua is a very small dog , he has a harmonious and balanced aura .

His character is friendly and very dynamic. The Chihuahua has a strong temperament and can be very suspicious of strangers. Because of his skills he is well suited as a companion dog. Barking his distrust of strangers and their tendency makes the Chihuahua to a watchful dog and therefore a guard dog on his own way. The Chihuahua is a very brave dog who is not afraid of opponent that is larger than himself.

He hates being alone, loves and guards his people and his territory. Does he thereby rein, it can be for small barker. With enough exercise and program of Chihuahua shows all the positive sides of a Companion and dog. Since the dwarf is very fragile, it should be kept out of the raging children, otherwise he defends himself with barking and possibly with his teeth.

The Chihuahua has an apple - shaped head, a short snout, large and erect ears. The expression of his eyes is very strong and prominent. He has a compact body which is cylindrical.

Despite its fragile appearance , it is a sturdy dog of particularly long lives , especially in comparison to other breeds . A gesinder Chihuahua may well be up to 16 years old. His eyes are Solten checked and cleaned to prevent irritation. The eyes of the Chihuahua tend to dry out and tears. he should order to keep his fur silky and soft often brushed. His teeth should also be frequently and thoroughly cleaned. As is typical for small breeds can also be the Chihuahua get problems with the kneecap.

In recent years, more and more small dogs fell to a Patallaluxation ( PL ). The case of large breeds often present hip dysplasia (HD) is found only very rarely in the Chihuahuas.

What the Chihuahua does not like, is cold. He prefers to warm and cozy places. The kennel is therefore totally unsuitable for the Chihuahua. You can keep in small apartments prima him. He is also very small and has even there enough space to develop freely.

Between the Haarvarietäten short- and long hair is essentially a moderate difference : The long-haired are generally the softer and more acceptable. The short -haired have a bigger dick head , are investigator and must therefore be kept strictly on a leash in certain situations. Your investment for dominance must be met.

The short-haired Chihuahua is the more primitive type. He is progressive generally, a bit stubborn, headstrong and a bit more often brushed on riot.

The long-haired type is more gentle and friendly. He is more like and is therefore also in the education about simple to handle than its shorthaired counterpart.

The Chihuahua is the smallest dog in the world, but he feels strongly like a lion, so you should respect him like a big dog, and not treat it like a toy.

Fine-boned, but not delicate, with a compact exterior, a large head, high erect ears and a bright and clever expression

The Chihuahua comes in a long and in a Shorthair version; both sometimes have a double coat. The short -haired have fine sleek coat that Longhaired everywhere dense fur - except on the face and on the lower legs. Chihuahuas come in all sorts of colors, ranging from single color, bicolor to three colors through.

The size of the Chihuahua means that the dog is more sensitive than other and must not be touched hard. Otherwise, he just suffers sometimes from eye diseases, knee problems and sometimes of low water head, because the skull bones, which have at birth still an opening, not quite coalesce.

understand that the dog despite its tiny outlet needs and should have a sense of humor to the To deal undeniable complacency of Chihuahua.