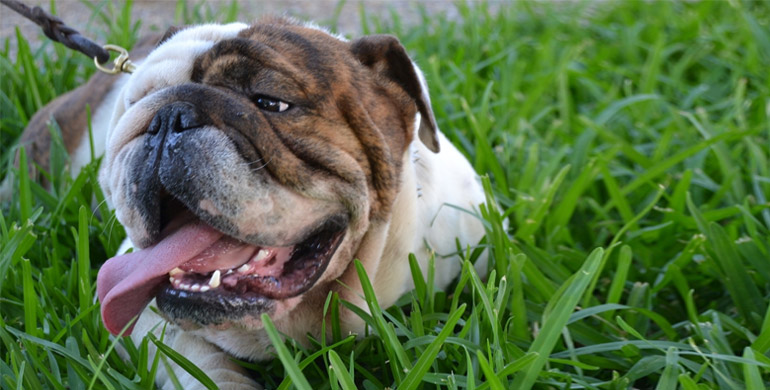 origin and history of French Bulldog of Französische Bulldogge

The French Bulldog is derived from the English Bulldog old type used inter alia for bull baiting and dog fights. After dog fighting was prohibited, also the breeding goal changed. Instead rowdy dogs smaller, peaceful dogs now were in demand. When breeding so was the Toy Bulldog, the most found followers abroad in Belgium and France.

In France hunters used this type as a hunting dog by crossbreeding it with terriers. These were carried out as a pack of dogs, weighing about 20 pounds and were mostly brindle.

They brought the small bulldogs who weighed about 10 kg, and continued their disarrayed breeding in the new native country - partly from hobby, partly to the heightening of her income. Which races to the today's appearance contributed can be understood, hardly more. Hauk just as E. Trekle (The French bulldog in 1937) mentions Einkreuzungen of terriers and pugs. The short rotated rod as well as the preceding eyes presumably come from the pug. Is certain that standing ears were bred only in France to the race sign.

Around 1900 the dog came back to England, but came there first because of the erect ears to the ridicule of the population. These dogs were judged on exhibitions such as the English bulldog for lack of a separate standards.

The first club for breeding this time still "terrier boule" said the dog was founded in 1880, opened in 1858, the first studbook and established in 1888 the first standard. The ears form was not quite uniform. As progenitor of today's type is considered the male "Loupi". He was about 15 years old and appears in almost all pedigrees. For a long time the race is a race of the underlayer. This only changed when the English King Edward VII bought a white dog with "Fledermaußohren" kinked and slightly crooked forelegs.

1888 found the French bulldog their way to the USA and became quickly popular. 1896 the first club was founded in New York. Just dogs with bat ears was traded very high in the first time - after the turn of the century up to 5000 US dollars were paid for such specimens. Soon afterwards the boom leveled off again, however.

Today's standard dates from 1931-32. In 1948 and again in 1986 was revised. In 1987, the recognition by the FCI. 1994 standard by the committee of the Club Bouledogue Français been readjusted with the collaboration of R. Triquet.

This breed portrait based on the article French Bulldog from the free encyclopedia Wikipedia and is licensed under the GNU Free Documentation License. In Wikipedia a list of authors.