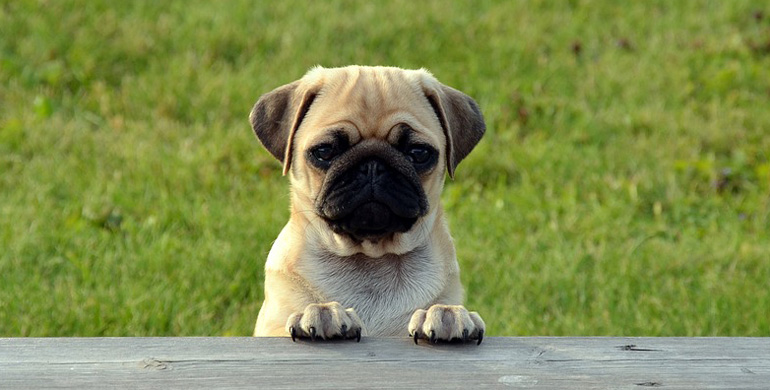 No dog as others. The Pug one falls completely or not at all. Ancient needle from the Far East, very docile and affectionate.

This rugged, compact and small dog is a pleasant companion dog. Since it tends to be overweight, a balanced diet is very important. The pug is very brave and often underestimated risk situations, such. as well with other dogs, as it have placed aggression often can not properly interpret it. He is very good natured, it can be kept well with other pets.

Unlike many small dogs seems the Pug to have been really exclusively bred for being a lap dog. Pronounced popular he was in the Danish royal court in the 17th century. And then became fashionable for some time in Europe. The pug loves people, is willing to obey and easy to train. His cheerful and acceptable temperament and his excessive discharge requirements make it be suitable for many models of life.

From time to time one should cultivate the facial wrinkles with a special lotion, loose hair can be removed with a rubber brush when needed eye drops must be administered.

A pug must be wound smoothly . He is very sensitive to changes in the Register , whereby tough punitive measures are unnecessary.

Pugs very well go around with other dogs and other pets, even in the presence of children or visitors they behave exemplary. They require a lot of attention and can become jealous when the attention of its owner towards someone else.

In cooler weather, it loves the pug to romp outdoors and run in warmer weather should be the dog, however, not be out too long and give him a shady location.

The pug, acting as faithful German stuffy, you can see it at hard to believe that he is originally from China, where his ancestors have been bred supposedly from larger molossoiden Danes already 2,400 years ago. In the 17th century he came to the Far Eastern trade routes to Holland, then to England and eventually throughout Europe and around the world.

For centuries, this small stocky dog of overfed and easily apatische favorite older ladies, then he became a caricature of a dog a bad name, but now he seems to be back in coming because one has recognized his real qualities.

The shoulder height is approximately 35 cm, the weight is specified with about 7 kg.

Short and soft in the colors gray, apricot. Fawn, or black. Mask and ears black, on the back. Just needs little grooming.

Individualists, which personality your dog means more than appearance and conventions.

Gets along well with almost all other pets. Predisposition to obesity and snoring. Prone to eye injuries, patellar luxation, skin disorders and epilepsy.