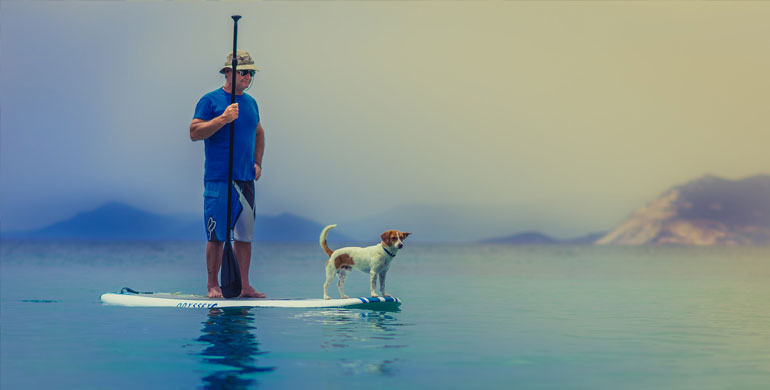 You can love or hate a Jack Russell but do not ignore. For many of the Jack Russell terrier friends is the Jack Russel terrier a prime example of all the good and bad qualities of a terrier. This little dog has a personality that far exceeds its wee body.

Mischievous, lively, loud-mouthed, playful and intelligent - Jack Russell, you can love or hate, but not ignore.

Some experts believe that under this name a whole bunch of varieties are referred because the different dogs of the same name differ in appearance very much.

Jack Russell, named after the dog was a hunting-loving pastor or priest who lived around 1880 in Devon in the south east of England. He bred the Jack Russell from a number of working terrier with the aim of creating a dog that was fast enough to run with the wild, and brave enough to follow a fox into the building.

His breeding was popular among hunters, and soon he was also in demand as a lively dog house. Today, the Jack Russell has finally made the Kennel Club recognized under the name Parson Terrier Eussel - it was registered in 1990 and 2001 the British Kennel Club American Kennel Club.

However, the breeding regulations are still being debated, since many dogs are counted without compromise to the Jack Russell, though they fall outside the relatively strict standards for appearance.

Regardless of the breed standards, most Jack Russells have one thing in common: the character. Parson Russell terrier are extremely smart and need a strong hand. They are courageous and sometimes scrappy with other dogs, but also very playful. Whatever happens, the Jack Russell would always be right there.

As a pet, they work best with experienced terrier owners who know what works and what does not, who discipline the dog through the training and enjoy the essence of the dog.

The Jack Russell Terrier requires little grooming. Occasional brushing is good for him and keeps the skin in good condition.

An owner, who knows loving and very consistently lead the dogs is, Jack Russells have no troubles. The Terrier burst almost with confidence - if you can go through them all, they are a quick dance around on the nose.

If the dog is properly socialized in his youth, dealing with other dogs and other pets will not pose any problems. Jack Russell's are by nature very courageous and independent hounds who accept the cat of the house, although, other cats but chase. With children they go to in the rules very well.

The dogs of this breed have a tremendous amount of energy and like to work. One can imagine that they are around the block is not satisfied with three walks therefore. The dogs want to run, play, and they dig very happy. They are excellent fighters and vermin therefore well suited for farms. Also in various dog sports make a good figure.

The character image of the

Jack Russells are very different in size, so that more thanin other breeds only approximate dimensions can be specified.

Various representatives of this breed can be the Body, head shape andLeg length difference, but the breeding rules require a powerful,balanced exterior that fits a working terrier.

There are three coat types: soft, wiry and broken lines, resulting in a mixed type oftwo first designated. In all three types the skin istight, thick and very short. The colors are white or white with black, tan or gray marks. called Tricolora balanced mixture of all three colors.

the energy to deal with the proverbial perseverance of Jack Russells, and sense of humor -the helps Training with this very stubborn dog.

Jack Russells are very different in size, so that more thanin other breeds only approximate dimensions can be specified.