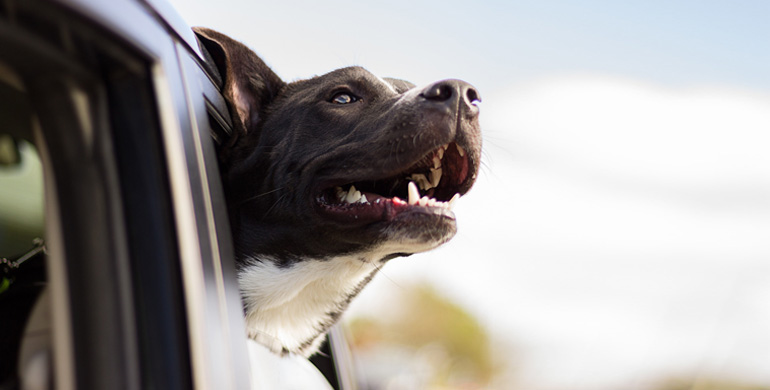 The dog as a passenger

So you and your four-legged friend arrive safely in your car to your destination, there are a couple things to consider. You want to know which is the safest way of transporting your dog? What are the animal protection systems? You can not decide between carrier or a safety harness?

In the following article you will learn how dangerous can be the unbelted transport your dog. We give hints to what animal protection systems exist and which is safest. Also legal aspects are considered.

Four-legged friends in the car

If you are traveling with your dog, then the car is by far the most common means of transport. For holiday trips by plane and train pets play only a minor role.

In the car, the dog should be buckled up while driving because the driver can be massively disrupted. In an accident, if the four-legged friend is hurled through the interior, not only the dog, but the man is extremely endangered. Even at an impact speed of 50km / h thirty times the self-weight can act on a body in a car. A medium-sized dog, for example, the Weighs 20 kilos, developed in an accident, the penetrating power of half a ton (approx. 600kg)! Since severest injury for both dog and owner. Buckling is therefore also important in the four-legged friends.

In recent years there have been on Germany's roads for unbelted animals repeatedly to serious traffic accidents. The worst happened in 2000 in Bavaria: A dog owner lost control of his vehicle on the highway because of his frolicking animal in the car, drove a forward-moving car on and caused a pileup. Property damage in excess of 50,000 euros. In cases like these, the insurance does not pay (AZ: 8 U 2819/96), accident-polluter must pay for the damage.

Violations are punishable by fines € 35

Generally speaking, for the dog as for the people to wear seat belts. Who does not secure a dog in the car, commits a traffic violation. In the law there is no specific rules to ensure that dogs in the car must be buckled. However, dogs and other pets are according to the law as a charge acc. § 22 Road Traffic Regulations (Highway Code) must be secured. They must be stowed and secured so that it including during emergency braking or sudden steering movements does not slip, fall or back and unrolling. This should be clear that dogs must be properly secured in the car. In addition, pursuant to § 23 of the Highway Code in command is responsible for ensuring that cargo and especially animals do not obstruct the view and hearing. Although it is not explicitly prohibited, that Bello nose plugged in through the window, but the driver's vision can thereby be impaired. Violations are punishable by fines € 35, at risk even with 50 € and three points.

You have, for example, the choice between special seat belts for dogs or a safety gate (up to 350 EUR). The latter separates the front area and the trunk, so that 'Bello' has no chance to suddenly jump forward. Caution: Networks that are not securely fastened, can not prevent a large dog, including power flying forward. A more practical option is a dog kennel (about 40 to 80 euros). This is also provided for the safety and the four-legged friend has his own little kingdom. Best for small dogs and cats is the ADAC considers a container which is placed in the footwell behind the driver or passenger and thus can not be catapulted forward. Maximum safety for larger animals also provide transportation boxes, which are provided transversely to the travel direction and directly connected to the seat back in the cargo space. The load compartment should additionally with a stable Partition grille be provided. Discouraged is transport of the box in the back seat, even if it is secured with the seat belt.

What is the safest way to transport your dog?

According to the ADAC, the safest way to transport animals in the car is by making use of transport boxes in the footwell of the rear seats or in the cargo area directly behind the seat backs and then combined with a sorting grid.

According to the ADAC is the fixation on the back seat with a holding harness, which is not run stable and discouraged allows too much forward movement. In the ADAC test the lobster clasp and animal dummy broke hit like a bullet in the back of the front seat one.

Hundegurt in the back seat is required!

The easiest way is with special harnesses that and the dog over the head Be inverted chest and then attached to the belt or Isofix hooks. Do not allow too much room to move and make sure that for large dogs, the closures and eyelets are metal.

The Clix Care Safe seat belt was designed by Dr Roger Mugford and combines comfort with safety. The inside has a soft neoprene lining and chest, there is a extra soft protection.

The Clix Care Safe seat belt is made from approved safety belt material. For extra-strength of the belt in one piece is made without seams. Test have shown that the clips can withstand a pulling force of up to 1500 kg.

The ergonomic design and the two clips in order to adjust the belt on the belly can assure a good fit of the belt, a well-fitting belt is safe because the dog does not fly out ider itself can regurgitate. The waist belt has on each side a clip to the harness easy to put on and off.

With the universal clip on the harness of the strap can be clicked directly on most Autogurtsystemen. The harness can also be fixed by dragging the (fixed) Car of the rear seat belt through a loop at the end of the Clix Care Safe seatbelt.

The seat belt is also suitable for walking or training purposes. He chokes not, and dogs pulling on the lead, do not damage her neck. 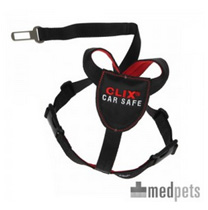 The Clix Car Carsafe dishes can be adapted quickly and simply.